World Championship title for Team Finland and now Classic as Champions Cup winners, too. Finnish floorball has spent its midwinter gloating in the spotlight of success. 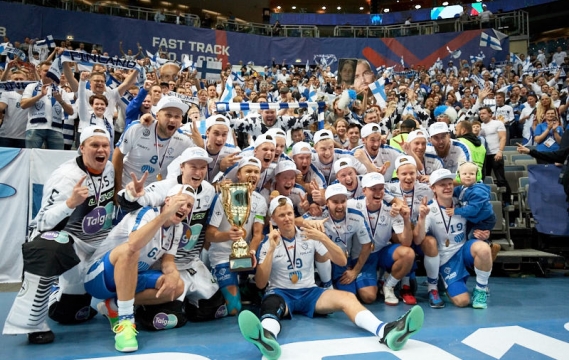 Finland is celebrating at WFC 2018 in Prague.

Floorball had its share of publicity in Finland's annual Urheilugaala (sports gala) where everyone who is something in Finnish sports gathers at the mighty Hartwall Arena that is decorated as a giant ballroom. Succesful athletes, sports legends, sports bosses and politicians dine at the tables dressed in suits, tuxedos and evening dresses while the hoi polloi buy tickets to watch from the stands or on national live TV.

For floorball, the high point of the gala was Nico Salo and Petteri Nykky taking the podium to accept the trophy for the Team of the Year in Finnish sports. Salo made short speech telling how everyone in the team was accepted as oneself which lead to the kind of team cohesion that made it possible for Team Finland to win the WFC title. This was not the only category where floorball was noted, either. Finlands quick three-goal streak in the WFC final was nominated for the most heart-pounding sports moment of the year and Petteri Nykky was one of the candidates for the coach of the year. This was not the first time floorball was included. In January 2009, Tero Tiitu gave un unforgettable speech as he accepted the trophy for heart-pounding sports moment of the year that was his overtime goal in Prague in 2008. That category is voted by the public which makes it especially powerful.

Speculation about missing a medal
Looking back now, there's a whiff of air of unreal seeing Finnish teams hold the WFC and Champions Cup titles. Neither had looked like a safe bet beforehand. Classic had had two attempts for the CC getting beaten first by Storvreta in 2016 and then by Falun in 2017. First time it was with a one-goal margin but against Falun Classic were, as Jussi Piha put it, never even close.

As for the Finnish national team, there were lots of bad signs before the WFC and even at it.  As usual, Finland had lost most of their games against Sweden and now against Switzerland, too. The Czechs' home support looked so strong there was speculation about Finland not making the final or maybe even missing a medal which had never happened. Players like Juha Kivilehto and Mika Kohonen were once again declared too old to hang on to international tempo, Peter Kotilainen had been far from fit all season and critics said Petteri Nykky's team lacked the offensive structure to beat good opposition. 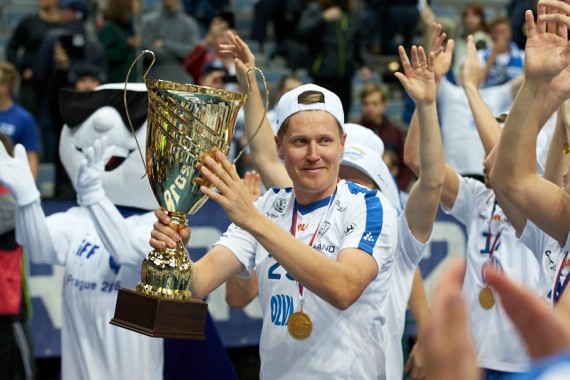 In the group phase, too, Finland was far from impressive. Formations kept on changing and the team seemed to struggle along. Until the final weekend when everything suddenly seemed to snap into place. Peter Kotilainen as much of a threat as ever, Juha Kivilehto scoring twice (!) in the final with his previous national team goal in the 2012 WFC against Petteri Nykky's Switzerland in the overtime.

Classic = Finnish national team
Classic's performance against Storvreta in the Champions Cup final was almost as impressive. Winning against Storvreta felt possible on a good day but no one had even dared hope they would crush the Swedish champions with 10-3. Of course, Classic and Team Finland had lots in common. Ten Classic players were there to win both titles and both teams were coached by Samu Kuitunen and Juha Jäntti with even Nykky being fresh out of Classic. And as Storvreta coach and also Team Sweden Andreas Harnesk put it before the CC: "Classic is the Finnish national team, most of the same players, same coaches, same system of play." Indeed, both relied of the same game plan against tough opposition: Guard your goal tightly and immediately counterattack when you find the opponent unorganized.

With three straight Salibandyliiga titles, Champions Cup was the only thing Classic had been missing. It is now the only Finnish floorball club that has won the Finnish league, the Finnish Cup and the Champions Cup for both men and women. After the Champions Cup final, the air was thick of congratulations for Pasi Peltola, Irina Peltola and Hannu Granroth and all others who have been building the Tampere success story in floorball for almost 30 years now.

Floorball has overtaken Icehockey
After this season's successes one can also sense a slight change in the overall attitude towards Finland. With WFC games shown on TV and the sport making the headlines there's always a crowd of people appearing to express their contempt about how a school activity like floorball gets publicity among real sports. But this year there were also renowned sports journalists writing about how floorball obviously has done something right and other sports better take a look and find out if they could learn something.

This is not only a result of the recent titles. There was also a recent study showing that for the first time there are more licensed floorball players in Finland than there are ice hockey players. With hockey having been the de facto Finnish national sport for decades, that is remarkable news. With Finland's success in several traditional sports declining, you can more and more often hear their coaches complaining how floorball now drains them from potential talented athletes.

Classic's remarkable professionalism has been displayed in Salibandyliiga, too. With so many of their players having worked through all national team gatherings, the WFC, the Champions Cup and the Finnish Cup, one would expect problems somewhere - but no. Even with Krister Savonen out for a few games and Eemeli Salin being missing with injury for a while, Classic just keeps dominating. With this being written, they have only lost one of their 20 Salibandyliiga games with Nokian KrP's Latvian Morics Krumins sinking them in overtime on October. Also, Classic have made the Finnish Cup final where they will take on Happee in their home rink at Tampere Areena the 16th February.

Behind Classic, SPV with Eero Kosonen and TPS with Miko Kailiala and Lauri Stenfors have shown a clear upward trend shadowed by the usual playoff-lot Oilers, Happee, EräViikingit, Westend Indians and Nokian KrP. At bottom, Koovee seems to be heading for relegation with merely six points in 20 games.

Fresh faces
In contrast, Finnish Women's Salibandyliiga looks more interesting than for a long time. This of course due to Classic finally becoming mere mortals after they lost national teams Eliisa Alanko, Ella Alanko, Nina Rantala, Katri Luomaniemi,  Sanni Nieminen, Hanna Sipiläinen and Minna Kallio.  Their junior-laden team started their season terribly but have slowly got going and are chasing a play-off spot with four straight victories under their belts. Slovak national team Michaela Sponiarova and Denisa Ferencikova are Classic's points leaders with an impressive season this far.

Reigning champions are of course SB-Pro who shocked Classic in last year's Superfinaali. They surprisingly kicked their coach Matti Kaipio before the champagne had had time to dry and his replacement was shown the door before Christmas. SB-Pro is now lead by Sami Saarikoski assisted by player legend Paula Jouhten and they also got Elina Kujala back after she had retired last spring but could not keep out of the rink after all. On top of women's Salibandyliiga, PSS from Porvoo have taken the lead with their young well-knit team. 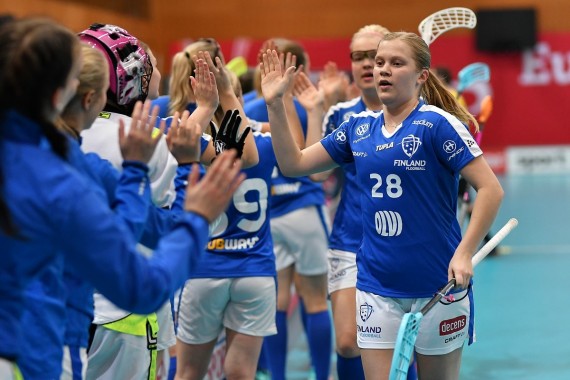 For the Finnish national teams, is games time again with Finland's men playing Sweden in Espoo and women traveling to Slovakia for WFC qualification. Petteri Nykky is starting the next project towards WFC2020 in Finland trying several young players like Justus Kainulainen, Rasmus Kainulainen, Aaro Astala and Eemil Ukkonen. Antti Suomela (Oilers), Oskari Heikkilä (Classic) and Joni-Arttu Sieppi (SPV) are to make their debut in the men's national team. "Again, it's a 700-day job interview to see who wants to work and live the way it takes to be in the 2020 team", Petteri Nykky put it.

For Finland's women, Veera Kauppi and Oona Kauppi's great success in Swedish IKSU certainly makes head coach Lasse Kurronen happy, too. After so many of his key players having retired, he, too, is building his team anew with new young players. Ella Sundström (PSS) and Milja Saarikoski (EräViikingit) are the national team debutants who get their chance in Slovakia.