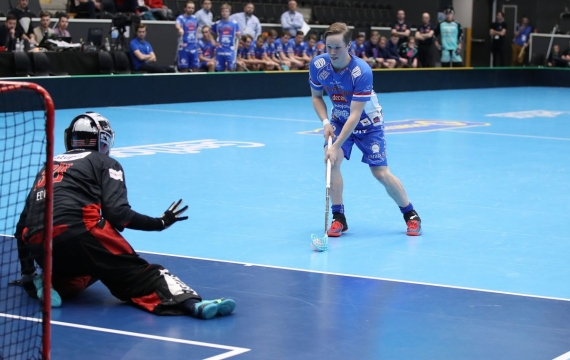 For the double World Champion Krister Savonen it is the first engagement abroad. For Wiler the joy of Savonen's commitment is great. "On the one hand, because we can present an attraction to the SVWE-fans, but also to the entire league," said Wiler sportsdirector Marcel Siegenthaler. On the other hand, because in the floorball scene it was expected that Savonen would end up with a Swedish top team. "For us, the proof that SVWE is counted among the big clubs internationally," said Siegenthaler on the transfer coup, that was realized together with KRONAfloorball. Savonen has signed a one-year contract with option for another season.

With Jonaas Pylsy (winning two days ago another championship with Classic Tampere and beeing playoff topscorer), SVWE was able to announce the commitment of one of the most desirable striker in the transfer market two months ago, now it's almost the cherry on the cake: Krister Savonen is not only one of the best and most attractive players on the world.  He is second on the top ten list of the world's best players behind his compatriot and goalie Eero Kosonen. Though Savonen is currently classified as the best floorball outfielder in the world. Savonens qualities are in addition to the tackle strength and the technique, especially the playmaker qualities, although not so many points collected, but often initiates with ingenious plays scoring-chances (in hockey the second Assist, which is not awarded in floorball). The fourth title with Classics on Easter Monday  Savonen had to experience from the stands, because he pulled in the third final-game to a foot injury, which meant for him the end of the season.

With the obligation of Savonen there are three current world champions in the squad of Wiler-Ersigen. "What can we offer our young team more than to develop alongside these international top cracks", sees Siegenthaler in the current constellation an absolute win-win situation.


Krister Savonen, you are playing first time in your career abroad next season, how did that happen?
During this season I felt it was time to look for a new challenge. In the meantime I have won everything with Classic which you can win and also with finish nationalteam (Editor's note: 4 championship titles in succession, Champions Cup, Finnish Cup, plus two world titles with Finland).

Why Switzerland, almost every team in the Swedish Superligan would have liked to have you in their team?
I talked a lot with my Finnish friends who have been playing abroad and raved about Switzerland, this wonderful country. And the fact that I meet with Väänänen and Pylsy  two nationalteammates made the decision easier.

What can you say about Wiler-Ersigen?
Eleven Swiss championship titles, that speaks for itself. The club wants success, that's what I want too.

You will meet Matthias Hofbauer, who has just announced to extend his career by one year. What is your opinion about him?
I think it's great that Matthias continues, he is a legend. I am pleased to be able to play with him.

Can you improve yourself at Wiler-Ersigen?
(laughing): yes sure, currently I am the second best player in the world, I want to be the best ... Seriously: Of course, this election was a great honor for me. As a player you can and must always improve, because the others want to get better too. A new club, a new system, new opponents, there is a lot of potential to become a better player.

How would you describe yourself as a player?
I am a fighter, but also good with the ball. I think I know quite well, what I have to do in the game with or without ball.

When is your move to Switzerland planned?
That's not decided yet. I'll cure my injury and have some things to fix here. First and foremost, we want to celebrate the title with Classic. I wish Wiler all the best for the Super Final. Let's go guys, get this gold!