Certain experts have already said they are waiting for the season after this one in Finland. The reason: Classic Tampere who are simply too dominant for this year to be interesting. 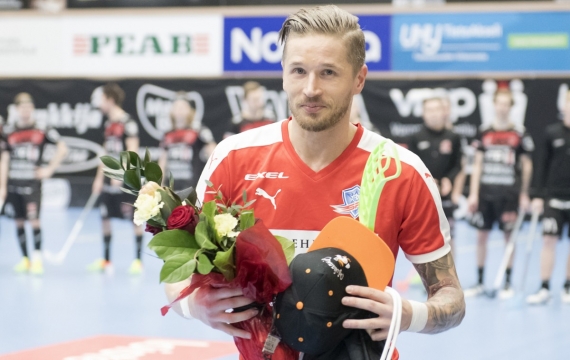 Mikko Kohonen is the first Finn to score more than 1000 career-points.

On 22th September Classic lost away in Espoo in overtime as Oilers' coach Heikki Luukkonen was evilly clever enough to pull his goalie and make the 4-4 a 5-4 to score the winner. After that, though, there simply has ben no stopping Petteri Nykky and Samu Kuitunen's squad. Classic have since recorded nothing but victories making it 17 straight with this being written.

Losing their World Champion center Nico Salo was supposed to slow Classic down for this season but their loss has showed little. Lately, Joonas Pylsy has been leading their first line with Eemeli Salin, Lassi Vänttinen, Mikko Leikkanen and Krister Savonen in it. With Jussi Piha leading their second unit and Joona Rantala the youngsters in the third, Classic find players to win games for them night after night.

Manager Pasi Peltola never runs out of marketing innovations and his big one for this season was a Salibandyliiga game against TPS to be played in nowhere less than - Singapore. With another win before a sold-out crowd, the game broadcasted live in Finland and a new set of business contacts in his pocket, Mr. Classic was able to return home tired but pleased with himself.

Classic moving to Hakametsä?
Yet, even in Classic's sky there are some dark clouds to be seen. It recently became known their Tampere Areena is to be demolished in a few years with the city planning to build a new street on its place. The future may still be even more light as the Mayor of Tampere Lauri Lyly hinted that the mighty Hakametsä Ice Hall that hosted the floorball women's WFC in 2015 might become a ball sports haven for Classic and others as Tampere is about to construct a bigger home for ice hockey.

Right now, Classic enjoy an eight-point lead at the table but number two Nokian KrP are definitely the sensation of the season this far. As another team from  greater Tampere Area, they have demolished last year's finalists EräViikingit twice, giants SPV, too, not to mention Happee. Against Classic, they pulled their goalie for a late equaliser but were beaten in the overtime by a short-handed goal by Eemeli Salin. 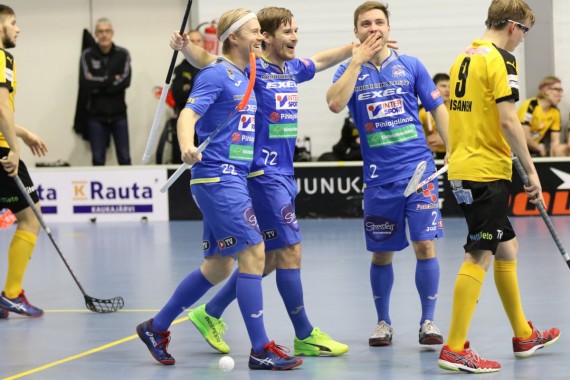 Henri Johansson and Nokian KrP know how to score.

Always known of their offensive and entertaining style of floorball, Nokian KrP have scored more goals than anyone but they also have almost double the amount against them compared to Classic. Lead by the league's top scorer Henri Johansson they have been able to score the most important goals that have won them games. A while ago, KrP shocked EräViikingit with a 12-6 win, almost ironic numbers when you remember that Nokian KrP never cared too much about their own net whereas EräViikingit coach Mika Ahonen has always been known for his teams that live off their defence.

With two Tampere area teams on top, voices demanding the Superfinale to be moved from Helsinki to the city have already been heard.

Kohonen vs. Johansson
Henri Johansson and SPV legend Mikko Kohonen have been battling for the league's all-time top scorer title and it now looks like Johansson is pulling away. After 19 games, Johansson's got 846 career regular season points against Kohonen's 835. With regular seasons and play offs combined, though, Kohonen is in a class of his own having just celebrated his point number 1,000 overall. the big one was an assist away against TPS Turku and the hosts showed class by stopping play to honour Kohonen's accomplishment with a bouquet of flowers reserved for the occasion and standing ovation by the crowd. Mikko Kohonen passed another Mikael Järvi who scored 998 points before retiring after last season. 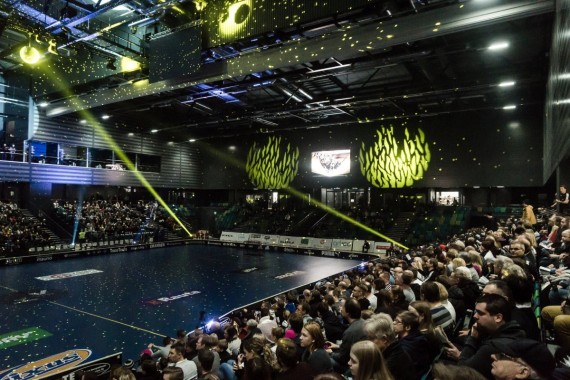 Giants lacking stability
Last year's finalist EräViikingit may be just pulling their act together but their roster may be too narrow for renewing their success. Big names like Jani Kukkola, Miko Kailiala, Mika Moilanen and Mikael Lax do a lot but behind them more class players would be needed. One answer might be Lauri Kapanen who is gearing up after having been out for more than a year with a major knee injury.

Without Seppo Pulkkinen's experience and bushy moustache behind their bench, Happee have looked good at their best but shaky and undisciplined at their worst. Last season's national hero Peter Kotilainen has only managed 12 games and 15 points with unspecified back problems but there is supposed to be more to come. SPV is another one lacking stability with more than 10 goals scored in five games but also with losses like 3-12 against EräViikingit, 8-14 against Westend Indians and again 4-12 against Indians. SPV have also been quite unlucky with national team level attackers Jari Hankkio and Jukka-Pekka Pelto-Arvo out with severe knee injuries.
Of the two Espoo rivals, Westend Indians have been another one of the season's surprises with their young guns producing and  Aaro Astala, Valtteri Kainulainen, Otto Lehkosuo and Heikki Iiskola all impressing Petteri Nykky enough to represent Finland in the WFC qualification in Tallinn. Heikki Luukkonen's Oilers have got to fight for their town after sliding seriously in the table after a good season start.

Janne Kainulainen's coaching has given newcomers SB Welhot a good first Salibandyliiga season and getting to play without imminent danger of relegation leaves them room to develop their play.  Not so for Koovee and Ville Lastikka's Steelers who seem to be heading for qualification as SalBa from west coast Rauma sit on the last hot seat. Ville Lastikka sure is Steelers' top scorer with 32 points in 19 games but bearing more responsibility now both in offence and in defence seem to have had an impact on his offensive potential.

Blogs and podcasts
Public Finnish floorball discussions have been more lively than for ages, greatly thanks to certain coaches' website Complex Floorball and a weekly podcast by LASB.

On their website, Perttu Kytöhonka,  Antti Hänninen, Mikael de Anna and Miika Peltonen have challenged old ways of floorball thinking and coaching and advocating the sport as a complex system that can not be developed reduced to separate things like tactics or physical or technical skills. Their almost academic essays on the subject have given the floorball community a lot to think about and they also do not hesitate to challenge national team coach Petteri Nykky's systems and ways to lead Team Finland.

Perttu Kytöhonka is also a regular in the podcast hosted by LASB manager Mika Virtanen where they sort out Finnisf floorball's weekly sensations and plays together with Toni Lötjönen. Former HIFK, SSV and Swedish league goalkeeper and loudmouth Lötjönen likes to provoke everyone and everything which often leads to interesting viewpoints and debates.

WFC-Silver brought publicity
Finland's women surprised everyone but themselves in the WFC in Bratislava as they pestered mighty Sweden all the way into a final penalty shootout. Their accomplishment brought women's floorball a lot of interest and publicity, probably partly because women's sports and equality matters are one of the big subjects of sports discussion this winter. In Finland's annual sports gala Nina Rantala, Veera Kauppi, Oona Kauppi and coach Lasse Kurronen represented their team dressed their best in the fire of cameras.

In women's Salibandyliiga, though, discussions have been in low tones. The mere 10 teams playing just 18 games each in the regular season is not much and there have been quite long times between games for certain teams. There are no plans public yet but it has been hinted that major changes are being planned to bring the series back alive again. 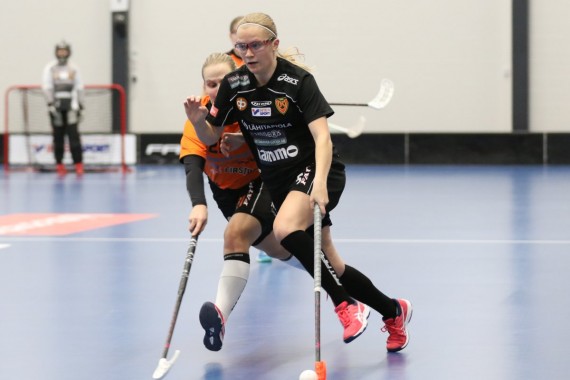 SB-Pro ends Classic's streak
In the rink, champions Classic pulled an almost unbelievable 38 straight victories until defeated by SB-Pro in January. After having lost the 2016 Superfinale Classic won all their games last season and started this one with nine straight. the end of their streak in 13th January was a special occasion as it also was SB-Pro's first home game in their long awaited home arena in Nurmijärvi. SB-Pro have practically always played and achieved medals away from home as there has been no regular-sized arena in their home town. This has changed now, and in the inauguration game Karoliina Kujala, Denisa Ratajova and Heidi Lirkki scored the goals in 3-2 against Classic.

Veera Kauppi and Oona Kauppi's Koovee is trailing the top duo real close and is another Finnish top club with a brand new home arena. The speciality of Koovee's new arena is a top-class camera and broadcasting system that allows them to stream their home games at will and publish game highlights just minutes after games ended.

Mia Karjalainen's PSS, SSRA from up north Oulu, EräViikingit and TPS are the rest of the seven teams that look like they might have a go for a medal of some colour. The remaining three ÅIF, O2-Jyväskylä and NST are having a hard time with just five wins among them. Just two years ago, NST-Lappeenranta celebrated the Finnish title after beating Classic in the Superfinale but are now dead last with 1-1-8 playing a new generation of inexperienced players.